With the playoffs well underway I thought it would be a good time to play a mini baseball season with Inning baseball.

It will be the inaugural season of the Karton Baseball League and will field 4 teams in one division (with plans to expand the league in the future in both teams and divisions).

Each team will play 2 home and away series of 3 games against the 3 other teams for a regular season of 36 games.

Then the top team from each division will play off in a 3 game championship series – THE BEAN CUP.

Each team gets a roster of 22 players and a minimum starting pitcher rotation of 3.

The inaugural teams are: 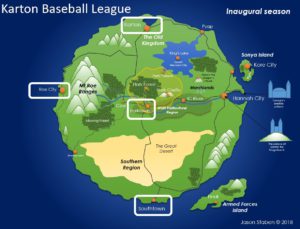 I have created a list of random names from my random name generator (which you can get here). I randomly created skills for each player and had a draft with each team choosing one player in turn until their rosters where filled.

I created a season schedule using the following page: http://bluebones.net/fixtures.php

Each series is 3 games in length: